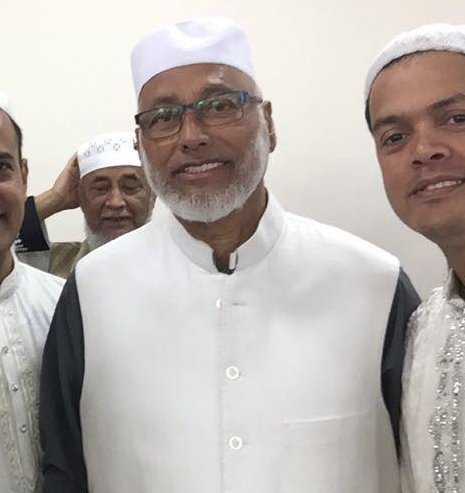 "We serve our community and our people. All people from all religions are welcomed, to see how we opperate as a muslim community. We work with the local authorities and council to ensure the area is well looked after"

Sithu Miah has been involved in supporting the community from the early 1940's, where he was involved in establishing the Eagle Street Mosque (Coventry) and taking the position as General Secretary.

As the population in Coventry had increased rapidly over the decades, Sithu Miah (alongside other Muslims within the community) had wanted to build something for the younger generation, for the Bengali community, and had started a collection in 1996.

It was in 1997 that, after a collection of funds and interest free loans of £185k, the land and building of Shah Jalal Mosque had been purchased.

The building had previously been a government building - a military training school, and after spending an additional £100k, the building was converted into a mosque, which had opened its doors to the public in 1997.

Since then, the facilities and services of Shah Jalal Mosque have been improved upon consistantly.

After the building acquisition of £185k, a further £100k was spent to convert the building into a mosque, in which it was 1997 that the doors were open to the public

With an increase in users of the mosque's facilities, a decision was made to extend the prayer halls and develop a seperate area for classes

Due to safety regulations and a presence of a number of elder users, a second stair case had been built alongside a lift for ease of access to and from the building